an overview of history

Born in Italy in the 1880s, Ettore Bugatti showed an early interest in auto racing, building a powered tricycle as a teenager and entering it in the 1899 Paris-Bordeaux race. He built his first race car at 18, employing a Four cylinder overhead valve engine with a four-speed gearbox. During The Great War, Bugatti created a 250 hp straight eight aircraft engine, but the size and power of the engine did not fit into any design then being prosecuted. On his own, Bugatti connected two of these engines on a single crank case, using a hollow propeller shaft so that a 37 mm cannon, mounted between the two banks of cylinders, could fire its shells through it. Designated U-16, the engine impressed the Bowling Commission so much that it bought the rights to it and had the Duesenberg Motor Company undertake the production of 5,000 of them under the name King Bugatti.

In the 1920s, Bugatti moved from Italy to France and remained a French citizen for the rest of his life, he died in 1946, and during two seasons of that decade his dark blue race cars swept past all competition, scoring one thousand victories and making the name Bugatti synonymous with the ultimate in performance. He also built touring and other cars and developed a strong nationalistic pride. This led him to start work in 1937 on a single engine racing plane to beat the Germans on their own soil, or, rather, in their own air, by competing in and winning the 1938 Deutsche de La Muerthe Cup, a race limited to aircraft with engines of 485 cu. in. displacement or less. To design his envisioned race plane, Bugatti brought in a well known aeronautical engineer by the name of Louis D. de Monge. The plane was given the designation Model 100 and was to be highly streamlined, powered by a straight eight Bugatti 50B racing engine, of 287 cu. in. displacement and 450 hp at 4500 RPM, which would have a lightweight magnesium block and be located behind the pilot, canted slightly to one side so the drive shaft could curve around the right side of the cockpit to the reduction gearbox in the nose.

Before construction began, however, the single engine design for the Deutsche de la Muerthe was abandoned, and the Model 100 was redesigned to be powered by two buried Bugatti 50B engines for an assault on the world airplane speed record. As soon as the new design was finalized, construction of the aircraft was begun on the second floor of a high quality furniture factory in Paris. While construction proceeded, the threat of a coming war increased. France was behind the times in aircraft design and was seeking everywhere for modern warplanes. Consequently, Bugatti received a contract for a light pursuit version of the wooden structure racer, designated 110P, which would be equipped with two guns, ammunition, oxygen and self-sealing fuel tanks.

The contract included a bonus, if the racer, when completed, bettered the world speed record of 440 mph, a record which subsequently was raised to 463.92 mph by a Heinkel He 100 (March 30, 1939) and then to 469.22 mph by a Messerschmitt Me 209 (April 26, 1939). With strong nationalistic feelings, Bugatti, the proud Frenchman, determined to wrest the record back from the Germans with his Model 100, which was considered capable of a speed of over 500 mph! But the course of events robbed him of any chance to try.

The Model 100 was just nearing completion when the Germans invaded France, and as the German armies neared Paris in June 1940, the plane was lowered out of the furniture factory to the street, loaded on a truck, taken out into the country and hidden in a barn, where it was to remain for nearly thirty years.

Though it never had a chance to fly, the Bugatti racer was a remarkable step forward in many phases of aeronautical design. The highly streamlined fuselage was built up of wood "sandwich", buttressed by rectangular box sections. On the polyhedral frame, layers of balsa wood were glued and carved to achieve the proper aerodynamic shape, Then hardwood rails and supports were set into the balsa wood to take concentrated loads at points such as the engine mounts and canopy, after which the structure was completed with a covering of tulip wood strips that were sanded and filled, then covered with linen and doped Bugatti blue. 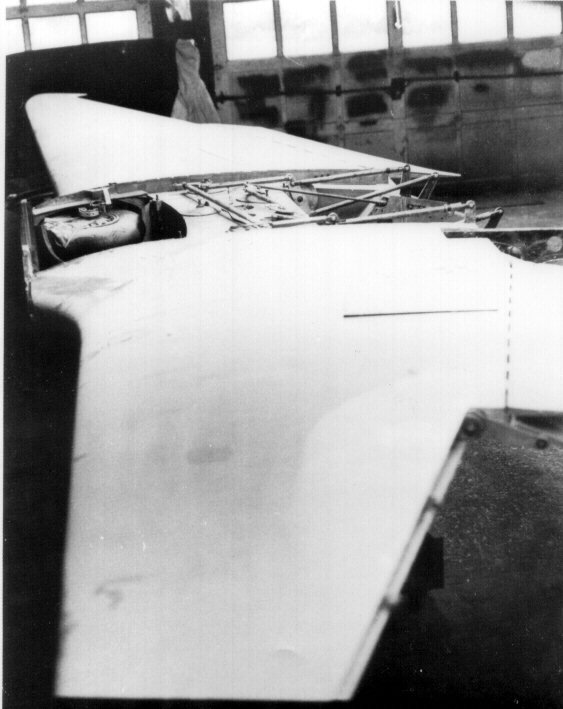 The single box wing spar carried completely through the fuselage, making for a one piece wing. The airfoil was built around the spar with balsa and tulipwood, linen' covered and doped blue. Fuel was carried inside the spar and drained by gravity into a center section tank, from which a pump fed the fuel to the engines.

The engine/power arrangement was one of the plane's most unorthodox features (see patent 526'460). The front engine was canted to the right and was joined to its drive shaft by a universal joint at the firewall behind the pilot. The drive shaft passed by the pilot's right elbow. The rear engine was canted to the left, joined to its drive shaft through a universal joint with the drive shaft passing by the pilot's left elbow. Just beyond the pilot's feet, the two drive shafts entered a reduction gearbox allowing the two propellers to be counter-rotating. The rear propeller shaft was hollow and the front shaft rotated inside it. The props were metal Ratier types, ground-adjustable. Engines and power train were built in Bugatti's Molsheim factory and shipped to the Paris furniture factory.

Also unorthodox was the racer's cooling system, designed specifically to reduce cooling drag to the minimum. Air was scooped into ducts in the leading edges of the butterfly tail and the ventral fin. The air collected at these high pressure points was rammed into a plenum chamber in the aft fuselage and passed forward through an increasing area duct to the radiator, which was located behind the rear engine. The air thus was slowed down to an efficient cooling speed by the time it reached the radiator. After absorbing heat, the cooling air was then exhausted out into a low pressure area behind the wing trailing edge. The pressure differential at the intake and outlet created a natural air circulation so that no fans or blowers were required. The radiator was in two parts, one for each engine.

The variable characteristic wing was unique in having its leading edge canted forward and in achieving some measure of variable geometry through its multi-purpose, self adjusting split trailing edge flap system (see patent 2,279,615). Both flap surfaces could be moved up or down to suit the speed and power situation. The flaps automatically set themselves to any of six positions takeoff, cruise, high speed dash, descent, landing and rollout. The flap control was linked to a complicated system that sensed manifold pressure and airspeed. At high manifold pressure and very low airspeed, the flaps set themselves in the proper position for takeoff. At low airspeed and low power, the flaps dropped into landing position and the landing gear was automatically lowered. In a dive, the flaps pivoted apart to form aerodynamic brakes. The flaps were wood skinned. Aileron trim was achieved without tabs through a typically Bugatti solution. They were push rod operated, and one section of rod in each wing was threaded to fit into the next. A trim crank in the cockpit screwed the rod section in or out, through a chain and sprocket, to make the rod longer or shorter. The ailerons themselves were wood framed and fabric covered. The tail surfaces consisting of two butterfly units and a ventral fin at 120 degree angles utilized the same sandwich construction as the fuselage and wing. Bugatti's V-tail control system was awarded a French patent in April 1939.

Ettore Bugatti died in 1946 with the Model 100 still stored in its barn. Subsequently, a gentleman named Pazoli acquired the entire aircraft and its engines. In time he sold the machine to M. Salis, and about 1970 it was sold to Ray Jones, a Bugatti automobile restorer from Detroit, who brought the aircraft to the United States. Jones immediately removed the engines to put them in Bugatti cars and left everything else the way it was. The airframe, with two large crates containing parts buried in the fuselage, was then bought by Dr. Peter Williams and moved to Connecticut for restoration. The airplane arrived there in February of 1971, a mock-up was done, and Les and Don Lefferts began putting the racer fully together. Work was nearly completed in the next few years, but no permanent home was found for the sleek, ahead of its time Bugatti racer, and it still remains in Connecticut.

The restoration was in itself a major accomplishment, and some parts of that work have been detailed for Skyways by Les Lefferts, who worked on the job from 1975 until early 1979 when it was terminated: "The restoration of the Bugatti 100 presented a very interesting challenge as there were no plans or drawings available for reference. "When the plane was brought to the Shop it had been completely disassembled, and all parts that could be removed from the airframe had been put into boxes, about ten in number, including parts that were unfinished but might be required, as the job progressed, to replace a missing part. "A decision was made to start with the elevators and ailerons, cleaning them up and making repairs where required. They were then covered with fabric, two coats of dope applied, and finished up with a coat of aluminum dope, after which they were set aside. "The wing was in the worst condition, having a large area of water damage on the right side close to the root that had gone completely through the upper and lower surfaces, requiring a patch of about two square feet in area. This area was cut back to where sound material existed, built up with balsa and covered with plywood to conform with the original contour, then it was covered with fabric and finished as the control surfaces. "With the wing restored, the fuselage was mounted on it so the filets could be installed. Each section had been predrilled to establish the locations of the fastening point on both the wing and the fuselage. These points consisted of an aluminum disc 11/16" diameter by 1/8" thick with center hole for a machine screw and three holes drilled for wood screws to fasten the filets to the airframe.

"After the filets were located, the fuselage was removed from the wing for the painting of the interior with the cockpit being red and the after section a light gray. "The controls of the aircraft were no problem, but the flaps were quite another matter. As most of the parts were in the boxes that came with the job, the solution was to select a piece that might fit until the system operated. After most of the work had been assembled, a friend sent the patent drawings verifying most of the linkage was correct. The one question that could not be solved was the connection of the inboard flaps with the parts left over, therefore, they never connected. "One part that was missing was the tail cone for the fuselage . . . the problem being the material used in the original. A decision was made to make one out of wood using the bread and butter method and then carved to shape using the offset method as in the lines of a ship"

Back to Bugatti Aircraft association
Back to the Bugatti Page